Recently, several compounds have vaulted into the forefront of the condensed matter field after being named prime candidates for the physical realization of a new class of materials, known as topological insulators. A topological insulator has an energy gap in the bulk, however, unlike traditional insulators or semiconductors, topological insulators are topologically inequivalent to the vacuum. A fundamental consequence and principle experimental indicator of the non-trivial topology is one or more robust metallic surface states that are protected both from localization and backscattering by time-reversal symmetry. Beyond the inherent importance of exploring a complex phase of quantum matter, these systems are of great interest for device applications such as quantum computing and photonics.

With the discovery of Dirac and Weyl semimetals, the idea of topology has extended from insulators to semimetals. In topological semimetals, Dirac-like band crossings appear in momentum space and is protected by discrete symmetries. Topological semimetals has attracted great interest since they host quasiparticles that cannot occur in vacuum but do occur in solid-state systems. The nodal-line semimetals extend the point-degeneracies in Dirac semimetals into lines/rings of degeneracies in momentum space. These unusual band structure and topology can be captured by powerful power-law analysis of response functions, e.g. optical spectroscopy. 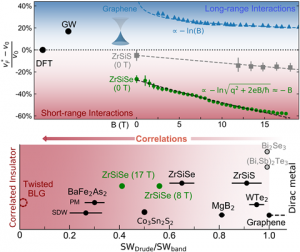 Three-dimensional (3D) Dirac fermions with highly-dispersive linear bands are usually considered weakly correlated, due to relatively large bandwidths (W) compared to Coulomb interactions (U). With the discovery of nodal-line semimetals, the notion of Dirac dispersion has been extended to lines and loops in the momentum space. The anisotropy associated with nodal-line structure gives rise to greatly reduced kinetic energy along the line. Here we report on prominent correlation effects in a nodal-line semimetal compound ZrSiSe through a combination of optical spectroscopy and density-functional-theory calculations. We observed two fundamental spectroscopic hallmarks of electronic correlations: strong reduction (1/3) of the free carrier Drude weight (bottom left) and of the Fermi velocity (top left) compared to predictions of density functional band theory. Interestingly, the suppression of the Fermi velocity is futher tunable with external magnetic field. This work has been highlighted by Silke Paschen and Qimiao Si, Nature Reviews Physics, 3, 9 (2021). 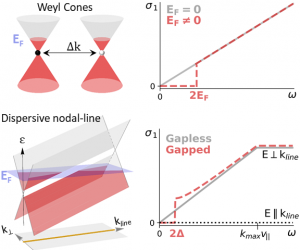 The 3D nodal points in Dirac and/or Weyl semimetals are in the vanguard of quantum materials research. A hallmark of these systems is the linear band dispersion (top left). This latter electronic structure gives rise to unconventional transport and optical phenomena. We demonstrate that solids with dispersive nodal lines in the electronic structure (bottom left) share many common aspects with the response of 3D nodal-points systems. We investigated NbAs2 using a combination of optical and magneto-optical techniques and have identified electromagnetic signature of dispersive nodal lines, see Shao et al, PNAS 116, 1168-1173 (2019). This particular compound has allowed us to inquire the impact of spin-orbit coupling on the universal characteristic of nodal metals. This work has been highlighted in PNAS cover, see also commentary article from Prof. Eugene J. Mele E. J. Mele, PNAS 116, 1084-1086 (2019)

Using magneto-infrared spectroscopy, we have explored the charge dynamics of (Bi,Sb)2Te3 thin films on InP substrates. From the magneto-transmission data we extracted three distinct cyclotron resonance (CR) energies that are all apparent in the broad band Faraday rotation (FR) spectra. This comprehensive FR-CR data set has allowed us to isolate the response of the bulk states from the intrinsic surface states associated with both the top and bottom surfaces of the film. The FR data uncovered that electron- and hole-type Dirac Fermions reside on opposite surfaces of our films, which paves the way for observing many exotic quantum phenomena in topological insulators.

Iron-based superconductors have been found to exhibit an intimate interplay of orbital, spin, and lattice degrees of freedom, dramatically affecting their low-energy electronic properties, including superconductivity. Albeit the precise pairing mechanism remains unidentified, several candidate interactions have been suggested to mediate the superconducting pairing, both in the orbital and in the spin channel. Here, we employ optical spectroscopy (OS), angle-resolved photoemission spectroscopy (ARPES), ab initio band-structure, and Eliashberg calculations to show that nearly optimally doped NaFe0.978Co0.022As exhibits some of the strongest orbitally selective electronic correlations in the family of iron pnictides.

We report the Drude oscillator strength D and the magnitude of the bulk band gap Eg of the epitaxially grown, topological insulator BiSb2Te3. The magnitude of Eg, in conjunction with the model independent f-sum rule, allows us to establish an upper bound for the magnitude of D expected in a typical Dirac-like system composed of linear bands. The experimentally observed D is found to be at or below this theoretical upper bound, demonstrating the effectiveness of alloying in eliminating bulk charge carriers. Moreover, direct comparison of the measured D to magnetoresistance measurements of the same sample supports assignment of the observed low-energy conduction to topological surface states.