The problem of high-Tc superconductivity is surpassed by few, if any, other unresolved problems in modern physics in terms of its complexity, impact on other fields, and potential technological significance. Systematic exploration of copper-based cuprate and Fe-based high-Tc superconductors has already led to new concepts in condensed matter science and has uncovered numerous novel states of matter, including d-wave superconductivity in the cuprates, spin/charge stripes, nematic and nodal electron liquids, Hund’s metal, among others. Yet many mysteries still remain regarding the fundamental mechanism of unconventional superconductivity. Open questions include the pseudogap state, the energy scales of condensate formation, the relationship with magnetic order, and the role of inhomogeneity, among others. Review articles: [146] [149] [76] 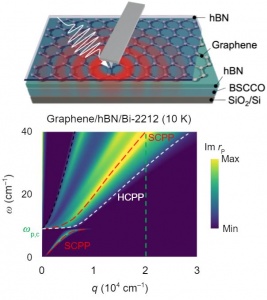 Hyperbolic Cooper-pair polaritons (HCP) in cuprate superconductors are of fundamental interest due to their potential for providing insights into the nature of unconventional superconductivity. Here, we demonstrate a general approach to enhance near-field signatures of HCPs under strong coupling in planar graphene/hexagonal boron nitride (hBN)/ Bi2Sr2CaCu2O8+x (Bi-2212) plasmonic cavities. Our simulations show that the plasmonic cavity effectively alters the electromagnetic environment of Bi-2212, strongly enhancing the HCP modes. The degree of enhancement can be selectively controlled by tailoring the insulating spacer thickness with atomic precision. Finally, we verify the expected renormalization of room-temperature graphene SPP using near-field infrared imaging. Our modeling, augmented with data, attests to the validity of our approach for probing HCP modes in cuprate superconductors.

Iron-based superconductors have been found to exhibit an intimate interplay of orbital, spin, and lattice degrees of freedom, dramatically affecting their low-energy electronic properties, including superconductivity. Albeit the precise pairing mechanism remains unidentified, several candidate interactions have been suggested to mediate the superconducting pairing, both in the orbital and in the spin channel. Here, we employ optical spectroscopy (OS), angle-resolved photoemission spectroscopy (ARPES), ab initio band-structure, and Eliashberg calculations to show that nearly optimally doped NaFe0.978Co0.022As exhibits some of the strongest orbitally selective electronic correlations in the family of iron pnictides.

We report on the infrared studies of the interlayer charge dynamics of a prototypical pnictide superconductor Co-doped BaFe2As2. We succeeded in probing the intrinsic interlayer response by performing infrared experiments on the crystals with a cleaved ac surface. Our experiments identify the coexistence of the suppression of the electronic spectral weight and the development of a coherent Drude-like
response in the normal state. The formation of the interlayer ondensate is clearly observed in the superconducting state and appears to be linked to coherent contribution to the normal-state conductivity.

The insulator–metal transition remains among the most studied phenomena in correlated electron physics. However, the spontaneous formation of spatial patterns amidst insulator–metal phase coexistence remains poorly explored at the meso and nanoscales. Here we present real-space evolution of the insulator–metal transition in a V2O3 thin film imaged at high spatial resolution by cryogenic near-field infrared microscopy. We resolve spontaneously nanotextured coexistence of metal and correlated Mott insulator phases near the insulator-to-metal transition (160–180 K) associated with percolation and an underlying structural phase transition. A quantitative analysis of nano-infrared images acquired across the transition suggests decoupling of electronic
and structural transformations.